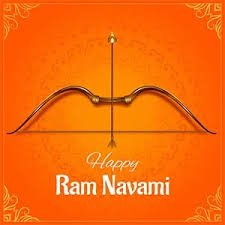 Ram Navami marks the birthday of Lord Ram, who is known to be the 7th incarnation of Lord Vishnu. Each year on Chaitra Shukla Navami (the ninth day of the bright fortnight of the Hindu Lunar month, Chaitra) Ramnavami is celebrated. In several temples, Sriramanavami is celebrated for nine days from the first day of Chaitra Navratri. Also, people observe fast on this day.

Sriramanavami is a major Hindu festival and is widely celebrated with great devotion. Shri Rama Navami is highly popular amongst Vaishnavites. Its celebration includes:

1.  Narration of Ramayan take place on Rama Navami
2.  People recite Ramaraksha Stotra
3.  Kirtans are organized
4.  Idol of Shree Ram gets ready with beautiful ornaments and embellishments
5.  Idol of Lord Ram is swung in the cradle

1.  Take a bath and sit on a Puja place with all Pujan Samagri (items needed for Puja)
2.  Tulsi leaves or a lotus flower plays an important role in his worship
3.  The worship of Lord Ram begins with the sixteen steps known as Shodashopachar Puja
4.  Prepare Kheer & keep fruits as a Prashad
5.  After Puja, the youngest female in the house puts Tilak (vermillion on everyone’s forehead)

The story behind Shri Rama Navami starts with the King of Lanka, ‘The Ravan’. In his rule, people were being terrorized and wanted to get freedom from his menace. Ravan had acquired the power from Lord Brahma that he would never get killed by the Gods or Yakshas (demigod). He was the most powerful of all. Therefore, due to this terrorism, all Gods went to Vishnu with a request for help. Thus, Kausalya, the wife of King Dasaratha, gave birth to Lord Ram. Since then, the day is celebrated as Sriramanavami. Also, on a Chaitra Shukla Navami only, Tulsidas had started writing Ramcharitmanas.

We hope that on this Ram Navami, your paths will be enlightened with true devotion and spirituality.