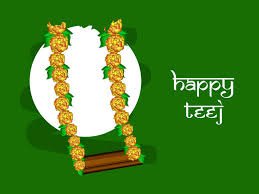 Kajari Teej, also known by the name Kajali Teej, is celebrated on the third day of the Krishna Paksha (dark fortnight) during the lunar month of Bhadrapada. According to the Gregorian calendar, the day falls during the months of July or August. Kajri Teej is primarily a festival of women. It is celebrated in Uttar Pradesh, Madhya Pradesh, Rajasthan and other parts of the country. The festival is also known as Boodhi Teej and Satudi Teej in some regions. Like Hariyali Teej and Hartalika Teej, Kajari Teej also holds an immense importance for married women. A fast observed on the day of Kajari Teej leads to happiness and bliss in married life.