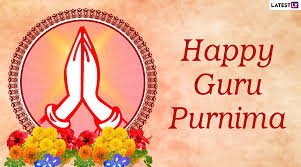 An eminent personality from ancient times; the author of incredible texts like Brahma Sutra, Mahabharata, Shrimad Bhagvat, and 18 Puranas; Maharshi Veda Vyasa was born on the Ashadha Purnima, as per the beliefs.

Ved Vyas was the son of Rishi Parashara. As per the Hindu Shastras, Veda Vyas was aware of all the Kaals (times – past, present, future). With his divine eye, he had witnessed that people will lose interest in religion in the future. Due to this, humans will believe less in God, they will avoid responsibilities and will have lesser age. Such a person cannot easily go through the entire Veda. Hence, Maharshi Vyasa divided the Vedas into 4 parts; so that people with less understanding and memory can utilize this knowledge.

After dividing the Vedas into 4 parts, he named them Rigveda, Yajurveda, Samaveda, and Atharvaveda. Due to this, he got famous with the name Veda Vyasa. He gave the knowledge of these 4 Vedas to his students – Vaishampayana, Sumantumuni, Pail, and Jaimin.

As this knowledge was quite mysterious and difficult, he created Puranas as the fifth Veda. In these Puranas, he explained the knowledge of Vedas as interesting stories. He gave the knowledge of Puranas to his student Roma Harshan. Students of Vyasa Ji further divided these Vedas into many branches and sub-branches, as per their knowledge.

Maharshi Vyas is considered our ancient Guru. This famous festival of Guru Poornima is celebrated as the birthday of Vyasa Ji. That is why we also know this day as Vyasa Purnima. We must consider our Gurus as part of Vyasa Ji and worship them.