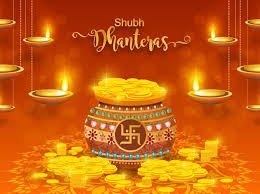 Celebrated on the thirteenth day of the Kartik month of the Dark Lunar fortnight (Krishna Paksha), Dhanteras graces the lives of the masses with affluence. Known by two names, Dhantrayodashi and Dhanvantri Jayanti, the festival lauds the discovery of the ‘Amrit Kalash’ by the Father of Ayurveda, God Dhanvantri by churning the sea. When the Lord appeared out of the sea, he had a pot full of ‘elixir’, due to which we are advised to buy pots and pans (utensils) on the day of Dhan Trayodashi. The festival comes prior to Diwali and heralds the oncoming days of merriment.