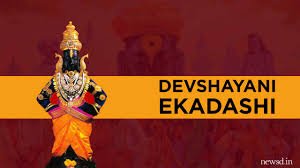 Devotees of Lord Vishnu wait for this auspicious occasion to pay their deep respect and devotion to Lord Vishnu and his consort, Goddess Lakshmi. People observe fast and pray to him, to get blessed by the supreme entity himself. The rituals of Ashadi Ekadashi Vrat according to the scriptures are given as follows:

●  Devotees who observe Devshayani Ekadashi Vrat, must wake up early in the morning, and purify themselves with a holy bath.
●  During mid-day, rituals are performed to pay homage to the souls of deceased ancestors and let them rest in peace.
●  An altar is set up to perform the puja rituals, and the Puja Sthal is cleaned to be embellished with the idol of Lord Vishnu.
●  Lord Vishnu’s idol is dressed in yellow-colored clothes.
●  Betel leaf (Paan), Betel nut (Supari), yellow flowers, sandalwood, etc. are offered to Lord Vishnu.
●  The people who are observing the Ashadi Ekadashi Vrat are allowed to consume food only one time a day.
●  During the Parana period on the next day, the fast can be broken by consuming food.