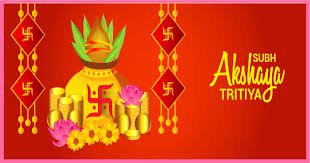 Akshaya Tritiya, which is also known as Akha Teej, is celebrated on Vaishakh Shukla Tritiya (the third Hindu date of the bright half of the Hindu month Vaishakh). It is a major festival for the people of Sanatana Dharma. On this day, donations, holy bath, Yajna, Japa, etc. give tremendous results. Akshaya Tritiya is a Sanskrit term. Akshaya means something which cannot be destroyed and Tritiya is the third date in the Hindu month.

1.  Akshay Tritiya is celebrated on the day when Tritiya Tithi of the bright half of Vaishakh is prevailing during the Purvahan Kaal.
2.  If Tritiya is covering the Purvahan for 2 consecutive days, the second day will be considered as the event. However, some people believe that it can only be celebrated on the second in one condition i.e. Tritiya Tithi must prevail for more than 3 Muhurats of that day.
3.  If Akshay Tritiya occurs on Monday or Wednesday along with Rohini Nakshatra, its auspiciousness increases immensely.